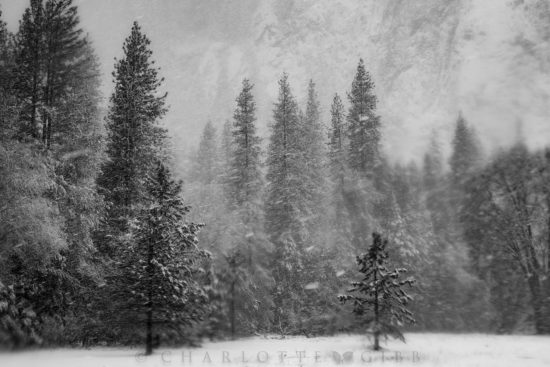 A stunning four million people visit Yosemite National Park each year. Most plan their visit for the summer months, and the majority of those only spend their time in the 5.9 square miles of Yosemite Valley. Consequently, the winter months are quiet there, but also very lovely.  Meadows are covered with morning frost. Mist weaves around the river and the meadows. Waterfalls begin to have some flow again as winter storms bring much needed precipitation to the Sierras. When snow is in the forecast, the hotels and campgrounds empty as people clear out of Yosemite Valley. And that’s just the kind of conditions that draw me to Yosemite.

Last week, one such storm was predicted. It had been a dry year for the most part, and little snow had actually fallen in Yosemite Valley, which sits at about 4,000 ft. elevation. I was already in the Valley to attend the opening of the Yosemite Renaissance Exhibit, which features two of my pieces this year. It had snowed lightly during my short visit, but the big storm was still yet to arrive later in the week. So, I drove back to our home in the Bay Area to drop off my husband, do my laundry, repack, then head right back up to the Valley.

At first, the storm seemed to be weaker than was predicted. The system only produced two days of light snow, but not much accumulation. Then, on my last night there, the sky seemed to open up. I awoke to over a foot of new snow, turning the colorful landscape to shades of soft white and grey.

Why Black and White Photography is Still Relevant