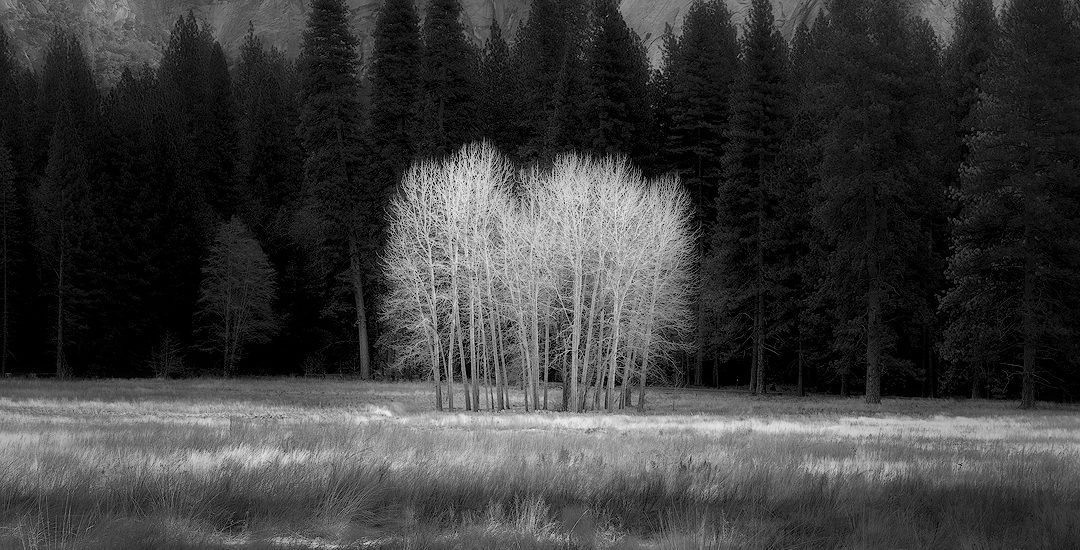 I recently made another series of photos of the Ahwahnee Meadow Cottonwoods in Yosemite Valley. I’ve photographed this cluster of trees, commonly called “The Ahwahnee Meadow Cottonwoods,” many times spanning several years. A few days ago, I posted a new photo of the trees. A friend, a biologist and someone whose opinion I respect, suggested that these trees might actually be Aspen, not Cottonwood. I had often pondered the same question. So, I promised to make a closer inspection upon my next visit to the trees, which just happened to be this week.

Identifying from a distance

The National Park Service understandably prohibits people from tromping through the Ahwahnee Meadow, so I could only study the trees from a distance. I used a long, telephoto lens from my position on the path to get a closer look. A tree’s size, habitat, range, flowers, bark, and leaves are each important clues to its identity, but blossoms are only observable in Spring, and it is currently late Autumn. So, no blossoms. Even so, a few yellow leaves were still clinging to mostly bare branches, which is important for identification.

Location is a clue

Aspen and Cottonwood are both from the genus Populus, so there are similarities between the two. Although they are cousins and share some general characteristics, there are key differences. Aspen prefer to grow on dry, rocky hillsides, which is why you find them along the Eastern slope of the Sierra Nevada mountain range. Cottonwoods prefer to grow in soils that receive regular moisture, such as near meadows or along rivers banks and streams. Cottonwoods can be found on both the East and West sides of the Sierra. However, Aspen are rarely found on the West side, which receives more precipitation than the dryer Eastern Sierra, where Aspen are much more abundant.

I’m pretty certain that the surrounding, less mature trees, are also Cottonwood. When they are young, Cottonwood trees have light colored bark with horizontal banding, very similar to Aspen. They don’t develop the darker, vertical-ribbed, thick grooved bark until they are much older. If you look closely, you can see that a few of the trees are starting to transition from the more pale bark to the darker bark with vertical lines.

The Ahwahnee Meadow trees are also missing the signature black “eyes” — sometimes also called “beards” — on their trunks, which is a key field mark of their Aspen cousins.

The leaves of the trees in the Ahwahnee Meadow are somewhat triangular shaped, which is typical of Cottonwood. Aspen leaves are more round or heart-shaped.

Based on its location, bark, leaves, and habitat, I’m pretty certain that these trees are Populus Trichocarpa, or Black Cottonwood.

So, what do you think? Aspen or Cottonwood? Or something else entirely?

You can see more of my most recent photographs on my gallery website, https://www.charlottegibb.com/new-releases

No comments yet
Ahwahnee Meadow yosemite 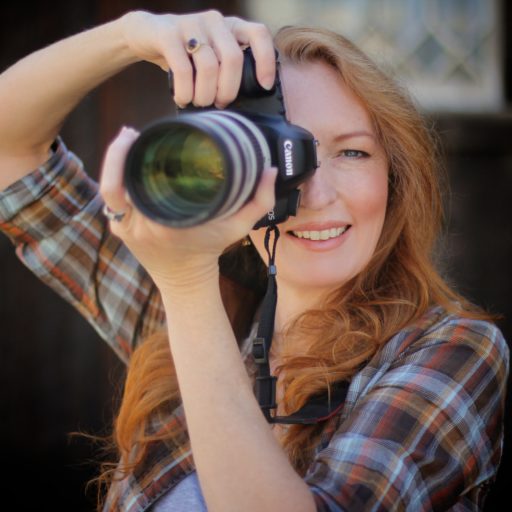